It has been a frustrating year with my climbing, having had several injuries to nurse and overcome. I’m back into the swing of things now, getting stronger and building fitness again. And more recently I have been working Tiger Cat (33) at Elphinstone, the new super crag in the Blue Mountains. If you haven’t heard of Elphinstone then check out some info here. The route was established in Jan 2013 by local climber Lee Cossey and has had several repeat ascents by local strong guns and high flying internationals. But most notably by local female climber Andrea Hah who turned it into her first ascent of a grade 33, big congrats to her. Tiger Cat is 35 metres long and has three distinct cruxes for me, all of which are quite bouldery but do-able, the key is linking it all together.

Things have been progressing nicely, very close nicely, on many occasions nicely. But it seems when I get close on Tiger Cat I lose momentum for some reason or another; injury, bush fires, rain, trips away, etc… you get the picture. Yeah, I know, rolling out the excuses, but a good run at this thing without interruption will be welcomed. 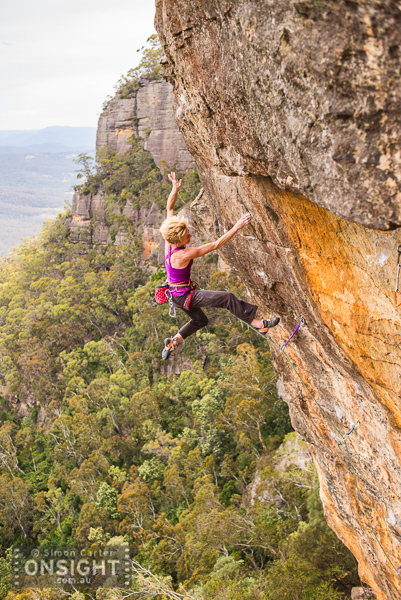 Falling off the last hard move on Tiger Cat again.

It’s a long route (35m), resistance style climbing and it has some nice rests. There is a lot going on in the brain and to forget one detail, one minor adjustment, at the critical moment, or to grab a hold wrong, means you’re outta there. You’re lucky to get more than two shots a day, depending on how spent you are or how far you get up the route, or how hot it is, etc. Conditions do help but it’s just a few critical moves where conditions make (or break) the difference.

It’s been exciting working a route at my limit so close to home. A luxury really, having such a mega-cliff just up the road, rather than on the other side of the world. I don’t know if that means I’m not trying as hard as if I were in Spain, for example? Or basically I just need to get stronger? The later most likely. I’ve always wanted to project a 33 in Australia, for 10 years, but there aren’t too many around here that really inspired, so I searched further a field. Now with this route being conveniently located, in my back yard, I’m super psyched to keep trying it and keep enjoying the process.

A quick play on the Rings

A quick play on the Rings