Arriving in Spain was like jumping into an icy plunge pool straight from the Simpson Desert, literally. I had escaped the sweltering heat of the Blue Mountains to winter in Spain, with my friend Will Currie, hoping that the fitness I had acquired on Tiger Cat (8c) would translate to fitness at Oliana, and maybe, just maybe put me in the league to give Mind Control (8c/+) a real good go. The first climbing day was stellar. Mind Control was as dry as a bone and as I clipped the anchors and lowered, a grin spread from ear to ear, I loved this place and I felt privileged that I was able to be here. Overnight rain fell, a lot, perhaps even enough that would see the route wet for the remainder of my short trip. 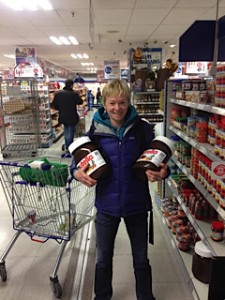 Even so, I was optimistic that it would dry (fingers crossed) in time for me to try the top ten or so metres of climbing to the anchors again. But realistically the only thing that happened in the first week was that I got a huge kick in the pants, as Will says,” got my ass handed to me on a plate”, once again. What I had neglected to acknowledge was that my fitness on Tiger Cat (35m) only translated to pretty much half way on Mind Control (55m). I was fit, but not that fit, and so I had a lot of work to do.

The problem being after a week or so more rain had fallen, again making the route only workable to half height. What to do? Should I keep trying this route in the hope that my patience (or stubbornness) would pay off? Or should I look for another project? Even though I was already half way through my trip I decided that getting a high point on the route was worth it, anything else would be just giving in. In the meantime Will was progressing nicely on Fish Eye (8c), almost getting through the lower crux on several occasions, if he got through that he was surely going to send.

And there was plenty of sendage every other which way you turned. Every second day a new team would arrive, we already had team USA stationed here for two months, ticking left, right and centre. The usual Spanish locals and international regulars, Barbara Raudner and Hannes, which I now call friends, are always a comfort to see. Team UK, two young lads came and went in a matter of three days, vowing to return in a month. Then team Austria arrived, Barbara Zangerl (if you are not familiar with her, she is the first lady to complete the alpine trilogy last year) and her not so sloppy other half Jacopo Larcher. I couldn’t trip over myself quick enough to congratulate her on her achievements. Needless to say they quickly despatched everything they touched. Daila Ojeda and Colette McInerney paid us a flying visit. Ramon Julian Publique rolled in one day with his younger brother and effortlessly onsighted Fish Eye (8c), worked a 9b+ then polished off another 8b for dessert. All in a day’s work really. I guess that is one of the reasons I love coming here. Being a teeny weeny fish in such a huge ocean is incredibly inspiring (and grounding) to watch such athletes do their thing without pomp and ceremony.

After another spell of rain I questioned my thinking once again, new project or stick with the one that blows my mind away? Encouragingly when we arrived at the cliff the next morning the damage was not as shocking as I would’ve expected, considering the fallout from the other downpours. I was excited in the hope that I could at least just try the route again in its entirety, be it, perhaps, only on the last day of the trip.

So I went for it. My prediction was almost right. The route did dry but not completely. I had been pacing myself so that my last two days of climbing would coincide with the best weather, that being the last day of the trip. Send day came and went with mixed effects. I can happily say that Will sent Fish Eye (8c) that day. A huge congratulations to him, he worked so hard and finally it paid off. As for me, well it was definitely my worst day of the trip. I guess I had realised that the route would not be dry enough for me to even try let alone send and I was disappointed that my fitness had eluded me, I was getting weaker and further away from where I hoped I would be. I guess that’s the result when you are only working half a route, be it a long one. I’m not one of these super elite climbers just a 41 year old having a hack. I didn’t send but I wouldn’t swap the experience. I was in Spain giving it a go, living my climbing dreams and having fun in the process. I guess it will have to wait till next time … if there is to be a next time?

our favourite detour … oh so yummy 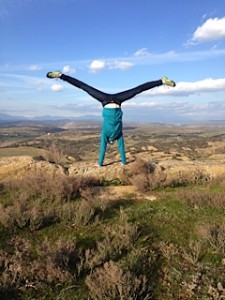 goodbye Spain … until next time?