To start things off, here’s a little trip report from earlier this year.

I don’t know if you have ever wanted to climb a route purely by looking at a photo. Well I have, plenty of times. The first time I became aware of the long Warrumbungles mega-classic Flight of the Phoenix was when Simon Carter’s Rock Climbing in Australia book was released in 1998. I had just started climbing and was captivated by this photo of two climbers dwarfed in a sea of prehistoric lizzard skin rock. I knew it would take a few years before I was brave enough to tackle it. 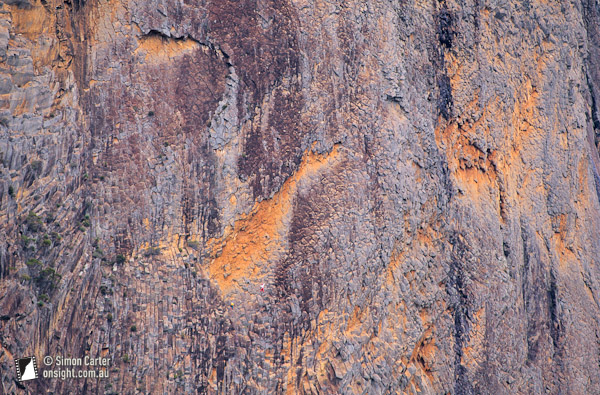 The photo from Simon’s book: AJ Brown (leading) and Jacob Greber, Flight of the Phoenix on Bluff Mountain in The Warrumbungle National Park, NSW, Australia.

So some fourteen years on I finally got the opportunity to climb Flight of the Phoenix (18), consisting of 7 pitches, taking in 330m. Mike Law and I had been talking about the “Bungles” because he wanted to do a new route and I just wanted to climb FOTP. We drove up late one afternoon in April and set camp in the dark, the next morning we were up with the sparrows and hiked for over an hour to reach the base of the intimidating Bluff Mountain.

I won’t describe the day with a blow by blow account of the climbing but basically I could wrap it up in a nutshell, you spend the better half of the day getting hopelessly lost in a mine field of haphazardly placed fridge sized blocks. Once established on the third and most spectacular pitch, traversing the line of grey rock under the magnificent orange wing, you can immerse yourself in the climbing, let your skin soak up the sun and let your mind soar with the Wedge-tailed eagles circling above. After that you spend the remainder of the day totally focused on getting off the route before dark.

All in all a truly memorable and very long day! Thanks again Mike.