I don’t often comment publicly on negative comments or destructive actions of others, whether they are directed at me or not. I’m a big girl. I know precisely what I have achieved with my climbing over the years. I set my own goals and climb because I love it. I don’t allow myself to get distracted by schoolyard pettiness. This time however I wanted to have my own voice about an incident that has recently affected me.

Earlier this year Michael Law and I went out to climb Slipstream, a five pitch classic located at Perry’s. The other reason for this outing was to check out an unclimbed crack project of Michael’s which he had been dangling under my nose for quite some time. To cut a long story short I tried it on top rope and did most of the moves. It’s a crack, and crack climbing is not my strong point, but it is something that I wanted to get better at. I thought by doing this route I would learn a thing or two and perhaps it would make me a more rounded climber. From the onset I was captivated by the line. It is 60-metres long and split by a natural ledge at half height. The first half is where the business is, a splitter finger crack breaching the impeccable orange face. I was psyched and determined to invest the time and energy to clean it and then send it. So over the following weeks I had static ropes in place and progressively cleaned out the crack to the top.

On the day before we left on our Queensland trip I went down there again. I completed cleaning the upper crack and had shots. I was incredibly close to sending it that day (I did it with one fall at the last hard move) but had to leave it until we returned from our trip up north. I left enough blood and chalk in the crack that a blind bat could tell someone was working it. There was also a piton (with tat on it) at the start of the crack to indicate that it was a project. 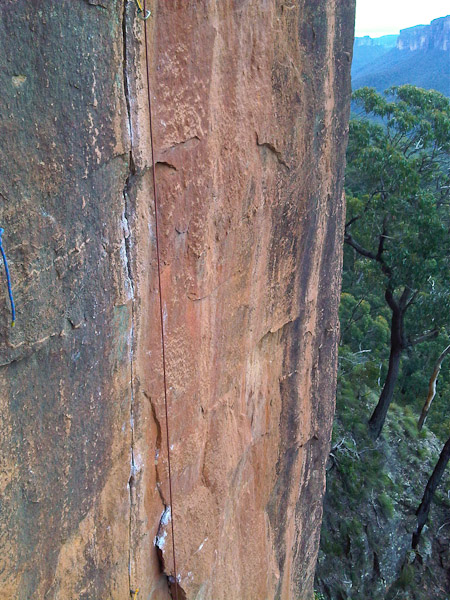 Some of the lower crack.

We are in Queensland now and yesterday I read online that the crack line had been done. Surely not? That must be another crack? But as I looked at the photo I began to recognise the features of the route and reality hit.

It’s a crack, it’s hard to have a crack ‘project’ (closed project), despite all of the work I put into it, these things happen. But the more I learned about what had happened the more utterly disheartened I became.

The climbers who did the first free ascent of this route contacted Michael Law to get an update, obviously because they had seen evidence of someone working it. Michael explained that I was actively trying the line and told them to leave it alone. So they knew precisely the situation and knowing this they went ahead regardless. They abseiled 180-metres into the Grose Valley with the intention to make the first ascent of the route that I had spent days cleaning and which I intended to free.

I agree people have known about this route for years but when I started work on the route there were no other takers. You would think that if someone was working the route then the courteous thing to do would be to wait your turn. I mean is it not common practice, or more so respect, to stay off a project until the tag is removed, signalling that the line had been sent? It may not present such a hard “tick” to some but for me it was a personal challenge, one which I wanted to pursue. I will still try to do the route but now it will be lackluster.

I am astonished that these people, who I thought were my friends, would do such a disrespectful thing. I travel widely with my climbing, and on occasions I have heard other climbers (that have visited the Blue Mountains) comment on the negativity of the community there. I am disappointed by what I hear. Isn’t it time for us as a collective community to pull our heads in and take note? Can we please leave primary school behind and behave like adults? Climbing should be fun, let’s keep it that way.