Kalbarri Gorge is unworldly. Imagine slicing through the pristine air, a slit from head to foot, just enough to squeeze through to the other side, into a moment from the past, as you enter the gorge the brick red cliffs, the serpentining river and the cobalt sky do their wonderful reveal, your breath leaves you and your skin tightens as goose bumps rise. The only other place that has had such an impact on me was The Olgas (Kata Tjuta) and if you have been there you’ll know what I mean. Just being in the gorge is a privilege, a glimpse of something very special, a place that hasn’t changed for ages, except for a few chalked up holds, here and there.  A feeling of calm washes over you and life as we call it ceases to exist.

Its June already. Its panning out to be yet another one of those years where you vow, “I’m not going to let this one slip by”. But inevitably you find yourself stranded like a humpback whale frolicking in cold seas when the rest of your pod have migrated to warmer climes or climbs as the case may be. Last year, when winter’s icy fingers tightened their grip we escaped north to Queensland, this year we went west, you know just like the song goes…Go west life is peaceful there. We went as far west as we could possibly go before dropping into the Indian Ocean and boy was it peaceful there. Kalbarri is located some 600 kms north of Perth, its where the fishing rods outnumber the postage stamps for sale in the tackle shop come post office, and the local pelicans are obnoxious.

Here at our makeshift HQ; a typical holiday garden villa, with a typical screen door that squealed like a cat caught napping in the engine bay every time it opened and closed. It was here that our numbers doubled. We were joined by our northern comrades; Sam Cujes, Lee Cujes and John (JJ) O’Brien. It was to be a whirlwind three day climbing trip. 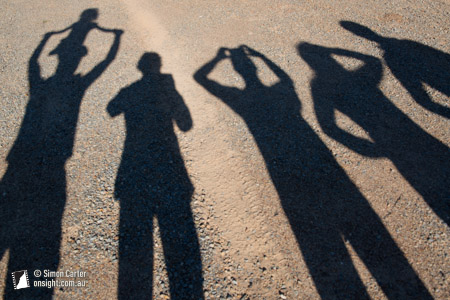 Our mission was simple: to climb as much as possible in Kalbarri Gorge. We focussed on The Promenade – the most condensed climbing area with routes graded 24-29. The days were short and climbing time was precious, like gold, and many things tried to ransack our loot. The closure of the main road into the gorge meant that navigating the sandy 4WD track was tedious and annoying, much like sand in your cossies, but at least we had the place to ourselves. 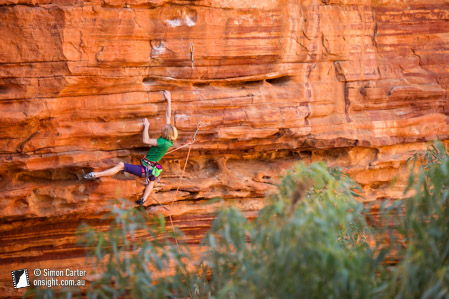 It was a nice hike to get to the crag, a chose-your-own-adventure, negotiating between the upper and lower terraces that hugged the lazily meandering river. You could certainly shave minutes off by stashing your climbing gear at the cliff and if you minus a certain four and a half year old you could easily be done and dusted with your warm-ups in the time saved. In saying that I certainly have to acknowledge the tremendous effort that Coco put in, walking in, and out, of the gorge three days straight. She loved it! 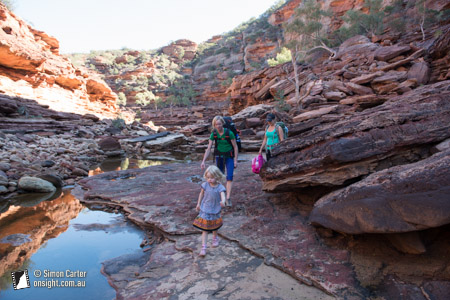 On the weekend we were joined by Perth locals Brian Tan, Gesa and Jean-Phillippe Dumas. 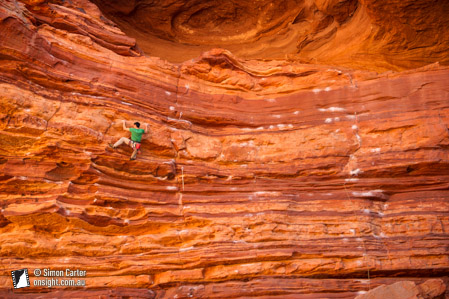 Like pent up monkeys in the zoo the comradeship was antagonistic, the antics acrobatic and the energy endless only thwarted by waning daylight hours not lack of wanting. The rock, a fiery fine grained sandstone, which seem to ooze a lifeblood of its own, climbed magnificently well, offering up Mulinesque scoops and open handed madness alongside pinches, pockets and jugs that were bigger than those found in a Bavarian beer hall.

The pace was furious, so much so that by day three my A2 finger pulley was starting to whine. I like wine so I didn’t pay much attention to it and just kept climbing. 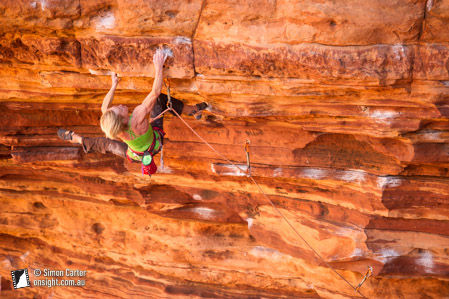 Things came together; JJ, the master of funk managed to unearth undiscovered knee bars to send Root Canal (27) in an unlikely fashion, and I’m not talking about his clothes. 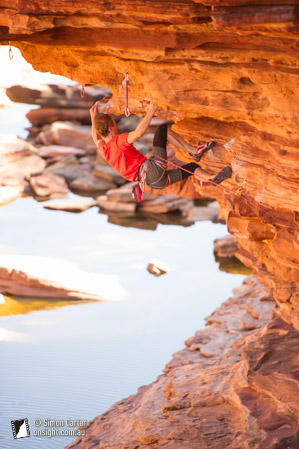 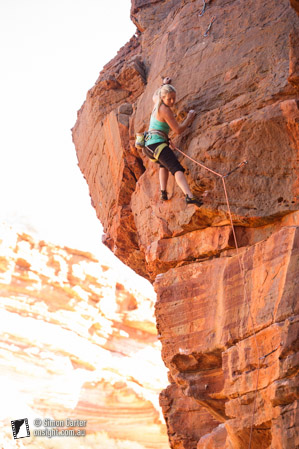 Sam warming up on the route right of Rattler (22)

And Lee, well, he diligently picked his way through every route at The Promenade and sent them all — every single one. 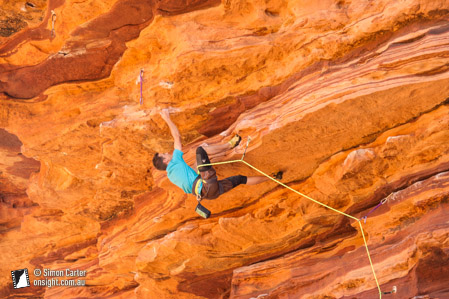 Meanwhile Simon happily fossicked away climbing and snapping some of the action.  I tried my new X4 Camalots out and went prospecting for some Kalbarri GoldÂ (26) and found plenty. And Coco became a savvy little entrepreneur by selling us back our lunch and climbing kit… thereby collecting all the loot. Mission complete. 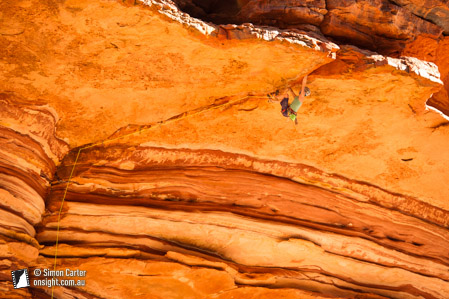 Down at Margaret River (Margs) I ignored my finger further and managed to get a bit more climbing done in between sporadic showers. Just like a Chihuahua with small dog syndrome nipping away at my ankles, the rain and my niggling finger gradually wore me down. I guess we’ll have to come back and bring sunshine… and a less annoying dog. 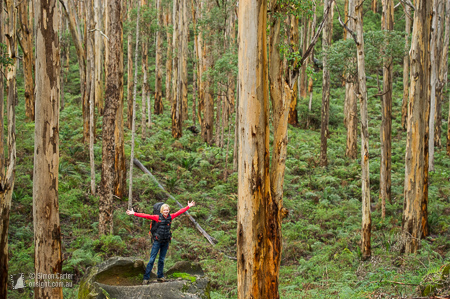 Thank you Rob Crowder for being so generous with your time and assistance. Thank you Anthony Brandis (CAWA) and the many energetic climbers we met along the way. Thanks for making our trip so memorable. Happy climbing…