If you have read my last blog Taming a tiger then you would know that I have spent some time trying a route called Tiger Cat graded 33 (8c, 5.14b). It is located here in the Blue Mountains, so I did have an advantage of the route being close to home at least.

It’s been a long journey but I am very pleased to say that two days after Christmas I finally tamed that tiger. Either I did or didn’t eat enough xmas pud, either way, I’m psyched to have done Tiger Cat.

The difference between sending Tiger Cat that day, as opposed to any of the other days that I made it to the final rest at the last draw, was, I don’t know. Puzzling, I think? I can say, that on that day I was fresh when I reached the last rest, this time I had got to there on my first burn of the day, and that certainly helps. But I know that other times I have reached the same point being even fresher. So what was it that made the difference that day?

I have been trying the route on and off for a few stints getting incredibly close each time before walking away from it. Be it because of injury, one of numerous trips away, or simply the six-month break over the winter. I had the route dialed but did I really want it? Perhaps I had already sent the route in my mind and I was just putting my body through the physical steps, I wasn’t hungry for the send. It’s possible that Tiger Cat had simply become a training route, and it’s true as I actually used it to train for Spain. Just recently I wondered if I wasn’t trying hard enough and so I made a conscious effort to really focus and switch my mind to send mode, not plod mode.

Had I become complacent? No, I don’t think so. It’s a bit of a juggling act between being fit, peaking, being rested enough, having familiarity of the route, remembering intricate sequences and body positions, being warmed-up enough but not blasted. Performing at your physical and mental limit is a hard thing to achieve, throw in other factors like weather, conditions, skin, school time limit and it is a hard balancing act indeed. But before I could strike that balance I needed to re-set several things:

Firstly, my training wasn’t translating to performance on rock. Training isn’t all about numbers, mileage nor performance outcomes, its about quality not quantity, it’s also about peaking and resting, patience. Previously I had been doing training in the gym. Be it bouldering, 4 x 4’s, building power or climbing continuously on the auto-belay at Villawood, where I was doing up to 40 routes in a 90-minute session. I could climb non-stop at a 90-95% pump threshold for a long time, awesome, but this approach didn’t exactly work for me on Tiger Cat. So I re-set and fine-tuned my training gains to realign with the climbing requirements for Tiger Cat.

Next, I had to be peaking but also be rested enough. Resting between climbing days is something that I am not good at, for me resting is boring. I knew that I had to be fresh to send Tiger Cat, meaning two days rest. But my brain says when you are idle for two days your fitness must be going backwards. This time round however I wasn’t going to listen to such nonsense and I didn’t bother trying the route unless I was fit, well rested and the conditions were at least half good. Re-set, I learnt again to settle the mind, to be patient when patience was required, and to convince myself that the hard work had already been done.

Further, I had to learn how to climb again in my own style. I realised that some of the training I had been doing had turned my climbing into a chug, chug, chug machine-like methodology where continuously climbing pumped was the goal. But this doesn’t work on redpoint. So I re-set and tuned in to my body to get my natural climbing tempo back to where it used to be. I practiced resting at crucial spots along the way and learned the pace required for this climb.

Finally, I realised that I needed to re-set my mind and concentrate on the task at hand. I found my mind wandering on several occasions, Tiger Cat is a long route (35m) and being present only half of the time wasn’t good enough. I needed to concentrate on every single move, climb in the moment, not thinking ahead of myself. Many times I had fallen because I thought I’d nailed the move, and I had, but my mind was racing ahead not where my body was, physically, at the time. The result was hanging on the end of the rope thinking, “what had just happened?”

You can say that being too critical and over analysing things can be destructive but at the same time I needed to consider what I did wrong and what I could improve on. Without this I was wasting my time and my belayer’s time. Lessons are learned from making mistakes if you care to try, care to fail and care to listen and learn.

So by addressing these points perhaps that is why I sent Tiger Cat that day? 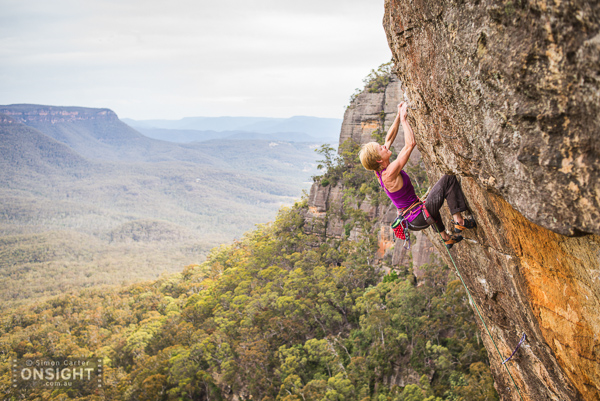 It was a quiet day at the crag, there was a gentle breeze and I had my personal head space, no one screaming at me just genuine encouragement from Simon. Almost silence, just me and the route. I listened to my body, rested when I needed to stay and went when I needed to go. When I got to the last rest I was pumped, but I tuned into where I was, and what I needed to do next. When I got the next left crimp I was strong, when I did the cross–over to the slot I was fresh, really fresh, not melting, this was a surprise I thought to myself. I launched for the throw and stuck it, still I wasn’t thinking that I had done the route, my mental alertness was thinking in the now, that was good. It wasn’t until I clipped the anchors that I felt it. Relief, freedom, excitement. “Waaahoooooo!” I’m sure all of Katoomba heard it.

All the days when I left the crag and had not sent the route, were all of those days worth it? You bet. Sitting back now, a week after the send, I am not thinking how great it was to tick another 33, rather, I’m thinking about how great it was to have completed a journey, overcome personal hurdles and to have maintained a strong belief in myself. It’s very satisfying to have seen this through to the end. To have closed that chapter in my life, it’s a nice feeling.

Thank you my friends at the cliff for the catches, laughs and great memories.